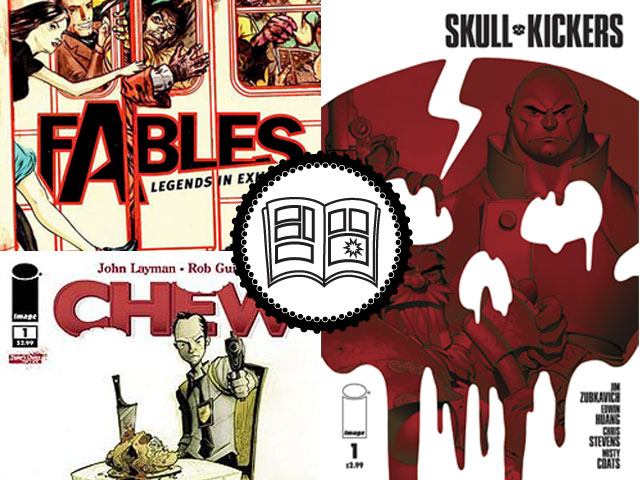 To a casual observer, comic books are all capes and sidekicks, or do-gooders righting wrongs. And while those types of stories are certainly in the mix (and quite popular with many) there are other kinds of stories that don’t always make it to the spotlight. We here at Geeky Gentleman believe that THAT’S a wrong worth righting. So we’ve started “Losing the Cape” a recurring series where we’ll introduce (or reintroduce, as the case may be) you to some stories that you may have missed.

For this first installment we’ve got three quality Fables for you to Chew on that are real Skullkickers.

Fables sets it’s stage in a very REAL New York City but focuses on a decidedly FICTIONAL cast of characters, literally and literarily. The story focuses on the exploits of fairy tale characters of legend when they are forced from to abscond from their homeland and hide incognito among the masses of NYC. With theft, swindling, and murder-most-foul…living with the Fables isn’t an easy life.  If you think this sounds familiar, you’re right. Several television programs such as “Once Upon a Time” and “Grimm” have their own takes on this theme, but if you’re looking for the true original, look no further than Fables.
This is a fairly popular one among many comic fans so, if you’re among the few that haven’t given it a look, it comes highly recommended by us.

“Chew” is easily one of the screwiest ideas to have ever graced comics. Combine equal parts buddy cop procedural, food network, and add a hefty dose of cannibalism and you’ve got a bonkers recipe. “Chew” tells the story of Tony Chu, former cop turned FDA detective. What sets Tony apart is his Cibopathy, rather, his psychic link with whatever he puts in his gob. Chu’s unique…talent…helps him solve the most off-the-wall crimes as he investigates the gastronomic case files of the FDA.

With witty dialogue, art with great character, and its hysterical premise, “Chew” is bound to be one of your new favorites…if you can stomach it.

Set in a “sword and sorcery” style universe very much in the vein of “Dungeons and Dragons”, “Skull-Kickers” tells the tale of two nameless, hapless ‘heroes’ with few scruples and a thirst for action. Their escapades usually earn them some coin and much more trouble than they bargained for. From zombie hoards to man-eating plants, the tall guy and the dwarf (They really are nameless!) The wit and action are both fast and frequent, while the world is has a wonderful character of its own. The story reads like an incredible role-playing campaign that doesn’t take itself too seriously. For instance, the sound effects throughout the series consist of phrases like “sneaky-sneak” and “imminent violence”. With wonderful character art from Edwin Huang and Misty Coats that practically BEGS to be animated, “Skull-Kickers” offers an experience in fiction I would place on-par with “Avatar: The Last Airbender”.

And so ends our first installment of “Losing the Cape”. If you have a series you’re really digging and think more people ought to know about, feel free to leave a comment.