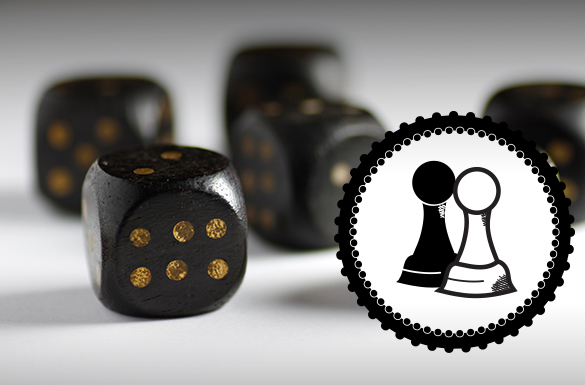 Recently, I’ve been fortunate enough to get together with a few friends and try out the latest and greatest edition of Dungeons and Dragons. It has been some time since I’d crafted a character, fought dragons and rolled some oddly shaped dice. And it’s those odd dice that left me wondering a few things about luck, randomness and chance.

For as long as people have played games, there has been one inescapable element: randomness; the element of chance, surprise, and luck. It’s often the thrill of the dice that attracts game players and game makers. This obsession predates written history.

The first physical manifestation chance in games is a pair of Backgammon dice dating back about 5000 years. From there, records of dice being used as randomization tools increase exponentially, most often in gambling or gaming situations. But they weren’t the only means of spicing up gameplay. In Imperial China around 600 AD, playing cards and games involving them were already gaining in popularity.

But what is it about rolling dice or drawing from a shuffled deck that lends itself so well to the way we play? It turns out that the element of chance speaks directly to (you guessed it) the human condition. The variety and uncertainty of a roll of the die echoes the variety and uncertainty in life. Roger Callois, a French intellectual who studied games and play, wrote in his 1958 work, Les jeux et les hommes (Man, Play and Games):

Agon (Skill) and Alea (Luck) imply opposite and somewhat complementary attitudes, but they both obey the same law – the creation for the players of conditions of pure equality denied them in real life. For nothing in life is clear, since everything is confused from the very beginning, luck and merit too….Play is[…] an attempt to substitute perfect situations for the normal confusion of contemporary life. In [games], merit and chance are clear and indisputable.

We have a plethora of gaming and gambling adages for life: “Play the cards you’ve been dealt;” “Sometimes you’ve got to roll the hard six;” “Know when to fold ‘em.”  Our culture has developed around these ideas about luck.

Luck, specifically, by the way; not chance. And it’s not just semantics. A study by Nehemia Friedland analyzes the dichotomy of luck and chance. It turns out that people who attribute random outcomes to “chance” are likely to make wagers on the statistically likely outcome. Meanwhile, those who attribute outcomes to “luck” are more likely to eschew statistical likelihood and operate on feeling and view luck more as a personality trait. For them, luck becomes a way of establishing their personal narrative.

Many games today implement some form of randomization in their engine, but we’ve moved far beyond simple dice-rolling and card-shuffling. Some creative uses of randomized content: Minecraft randomly generates worlds, and Indie gems such as Spelunky and Rogue Legacy randomize their dungeon layout each time the player dies. These features add fun, variety, and replayability to the games. Again, luck and chance have an appeal because they reflect the unpredictability of life.

Nowhere is this more apparent than in games that replicate real-world situations. One popular board game, The Settlers of Catan, uses basic dice-rolling and a randomly-arranged board of tiles and values that change how much of various resources (from grain to wool) are generated each turn, simulating agricultural life by mimicking the often seemingly-arbitrary harvest boon and drought.

Our best example of luck as a quintessential human element, however, comes from the game that sparked these thoughts: Dungeons and Dragons. D&D heavily incorporates dice rolling and statistical modifiers, but it also strives to create semi-authentic human (or elven, if you so choose) interactions. It creates a simulated, open environment similar to real life in which a player can attempt relatively anything, the result dependent on well-established rules based squarely (pun intended) on a dice roll.

But the potential for failure, untenable and mysterious in real life, is now observable and easier to accept. By being presented with chance and luck in a controlled environment, the curtain is pulled back on the mystery of happenstance, and engaging with fate becomes less intimidating and more enjoyable.

Luck in games is so essential because it is more than a mere tool for randomization. Rather, it’s an agent of narrative and storytelling. It allows players to adapt to new events and the game itself to reach out and touch the player. Dying to know what happens next? Roll to find out.