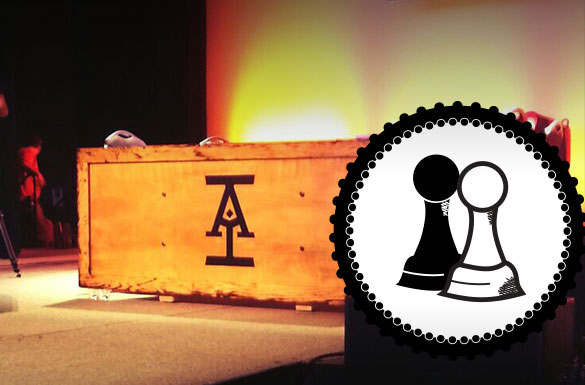 It’s April 13th around 2:00pm at the Boston Convention and Exhibition Center. Thousands of attendees of the Penny Arcade Expo: East (a convention better known as PAX East) have been in line for the past two hours or so for an event in the biggest theater the center has to offer. PAX East being a games-themed exhibition, you wouldn’t be faulted if you thought that this must-see event was showcasing a big-budget video game announcement or Q&A session. (There were a few of those as well.) However, the event that had so many folks lined up for so long consisted of five people sitting at a table and rolling some dice.

The creators of Penny Arcade, Jerry Holkins and Mike Krahulik, along with their friend Scott Kurtz have sat down to play an exhibition game of Dungeons and Dragons moderated by Chris Perkins, one of the senior producers of the game. This isn’t the first time they’ve done this. In fact, their travails date back to 2008 when Wizards of the Coast, publishers of Dungeons and Dragons, recorded Mike, Jerry, Scott, and Chris starting this campaign, creating their characters, and discovering the world of Dungeons and Dragons. The results were entertaining, engaging and, hilarious. They’ve since recorded their endeavors through the various installments of DnD released through the years to a steadily growing audience. Several years back, they held their gameplay session live to an enormous audience in Seattle at PAX Prime. Each year thereafter, they upped the ante with costumes, lighting, and other staged foofaraw.

This year marks the first time they’ve brought their happenstance stage show to the East Coast, and the GG team was in attendance. We’ve asked everyone to share his take on the wildly popular staged production of Dungeons and Dragons.

Andrew says the show embodies the best aspects of tabletop gaming: “The show was significantly more entertaining than I could have hoped for. Not only did the players have fantastic chemistry with each other, they also were able to adequately entertain the crowd with witty and satirical commentary throughout the event.The whole experience was a great reminder of just how enjoyable tabletop gaming can really be.”

Tim lauds the performance of Dungeon Master Chris Perkins, saying, “One thing that stood out to me was, with little time left in the panel, the team placed their trust in the DM to assemble some sort of ending to an adventure that had only just begun. They settled for a “To Be Continued” cliff-hanger, but truth-be-told I could have watched them play out that story for the rest of the day.”

Chris agrees. “There’s something about the way [Perkins] speaks that naturally pulls you in and sets your imagination on fire. He notes the ingenuity the players adapt to make combat engaging, “One instance that sticks out in my mind is Jerry’s creative use of his mace and a skeleton skull to attack a counter-spelling wizard in the skies.”

As for me, what I find the most engaging about these play sessions is the collective storytelling. It becomes less of a game and more collaborative fiction. Each player adds different ideas and actions to the narrative being woven. The game acts as some sort of intermediary that determines whether a player’s addition to the story is successful. Combine that with the comic minds of Penny Arcade, and you’re almost guaranteed to enjoy the show.

To experience a piece of the magic, here’s the PAX East play session in full.